I’m not judging you but a lot of us have been caught spreading butter with table knives. As soon as you read that, you might even realize that you still did it recently. Ha-ha.

But then, the table knife can be used to spread butter too, right? It is also the butter knife, only that we chose to call it something else, right?

Today, we look at the differences between your dinner (or table) and butter knife – and why they shouldn’t be used interchangeably either.

What Is the Difference Between A Butter Knife and Table Knife?

There are quite several differences between these knives, and you should know them.

When alone in my house, I do not care which knife I pick. I know that is poor form since practice makes perfect, but I do remember to differentiate them when dining outdoors.

Here are a few differences that you should keep in mind:

#1 They are meant for different tasks

If you look at the myriad of knives out there with their various forms, shapes, points, and whatnot, you know that there is a special knife for just about everything.

As the name implies, the butter knife is there to spread butter on your bread or other desserts. I also recently came across a master butter knife (pictured below) which is for scooping the butter from the main container into a smaller container to be used.

That makes a lot of sense to me. That way, you don’t return the smaller butter knife into the container, causing some breadcrumbs to fall in.

On the other business end of things, the table knife is there to make eating easier. When dealing with meat-based food, for example, the dinner/ table knife is what you use to cut your food while holding it down with a fork.

It makes sense for the butter knife to be dull since it is not made for cutting. You could as well take a tiny sheet of wood to scoop your butter and it would work.

When cutting food on your plate, though, you need something sharp enough – but is not too sharp either.

Likewise, you don’t want your food playing all over the place while you are trying to cut it, especially when eating on fine dinnerware. That is why table knives usually come with those finely serrated edges for better grip.

#3 Butter knives can be shared

When was the last time you went to a meal and you had to share the knife that you were cutting your meat, veggies or other food items with? Probably never, right?

Well, that could happen if you were out with family. However, it is not the norm.

On the other hand, butter knives are designed to be shared. Once one person is done with it, they should leave it at a central location so that another person can use it.

Note that the knife has not been directly put into your mouth or that of another user. It has to go into the same butter container that it had been in earlier, so it makes sense to share this one.

Although, I think the table knife can be confusing here too. After all, once you use it to fetch and spread some butter, someone else might do the same.

The fact that you can use both in the same way does not mean that it should be used that way, though.

#4 Table knives are the longest

…and by comparison, the butter knife is the shortest in a flatware set.

If you are not faced with the entire flatware set, it might be challenging to determine the relative length of both knives. In that case, the rest of the pointers on this list will help you.

Should you have access to the entire set, though, one of the fastest ways to tell them apart is by the length. Even before you see the serrated blades, you already know that the shortie goes into the butter bowl.

If you have gotten to this stage, you already know that I’m not kidding. These knives should not be used for the same things, especially when you are in a formal setting.

When in doubt, go through pointers one through four above again.

Do You Need A Butter Knife?

Within your own home, I don’t see the reason why you should use a butter knife.

I have personally never bought a butter knife with my own money, nor have I been gifted one. I think even if I get gifted one, I’d probably not use it.

Most of the time, I transfer butter from the container with a spoon, and that works just fine. I make a mental note not to use the same spoon twice/ without rinsing it off first so that the breadcrumbs do not contaminate the rest of the butter.

If you host formal gatherings in your home, you might look to invest in some butter knives for the occasion. Otherwise, you are good with using your spoon, spatula, or other table knives.

Can A Butter Knife Be Serrated?

I used to think all table/ dinner knives were serrated till I came across some that weren’t. So, I’m sure there’s a butter knife out there with some serrations if you look closely enough.

Non-serrated, dull edge butter knives leave a plowed finish on the face of the butter from where they have been scooped. Serrated knives, on the other hand, leave more of a breaking pattern in the butter.

I prefer the former to the latter anyway (and I get that with my spoons too), so I would stick with the straight edge butter knives if I ever went for one.

Why Are Butter Knives Dull?

If they weren’t dull, chances are that you would cut things with them. After all, the majority of us already abuse table knives by using them to spread better – so who’s to say we won’t do the reverse for butter knives?

Quite frankly, these are not designed to cut anything at all. Butter is soft enough that almost anything can pass through it. So, it makes sense that they are not sharp at all.

Likewise, while dinner knives are sharper, they are not as sharp as conventional knives used in the kitchen. I believe this to be a safety thing so that you don’t cut yourself while eating.

Both add up to tell us why the butter knife comes dull. 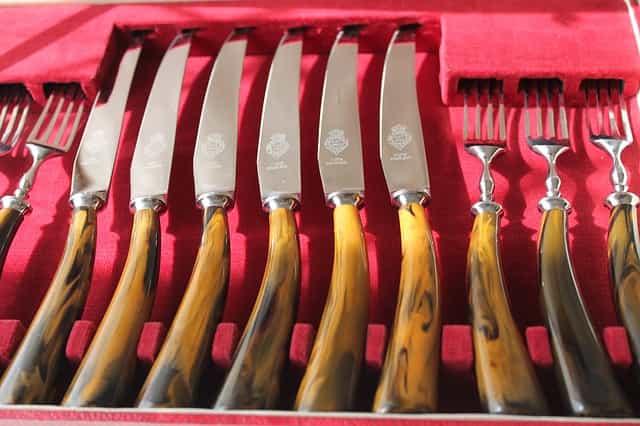 Knife fighting looks cool in the movies, but don’t go seeking it out. If there is one thing the movies get right – from the latest installation of the Mortal Kombat series to the popular Extraction – it is that a using a knife for self defense ends with two people wounded. The only thing… What kind of knife is that? This might not be a question that you ask yourself all of the time but the time will come when you need to know the name, family history, social security number (I’m kidding), and every other thing about a knife. This is where the knife identification chart comes into… If you’ve got a knife with the conventional edges, a quick run through the whetstone sharpening guide will have your knife back to its sharp self in no time. You might even prefer to hone the knife instead to reduce the rate at which you sharpen it. But then, the same sharpening rules do not…