If you have a Schrade knife that you maybe find in the attic or was passed down to you by an older person, you might be sitting on a nice collector’s item there.

However, how nice of a Schrade knife you have is also dependent on what era the knife came from. That is why, in today’s piece, we not only discuss how to date a Schrade knife properly, but what makes them special too.

Buckle up for some Schrade knife history and dating guide.

PS You can jump to the sections you want with the table of contents below. If you’re only interested in dating your Schrade knife, click here.

What’s the Fuss About Schrade Knives?

Switching the ownership of the Schrade Walden company a few times led to the decline in the popularity of the brand name which is why a lot of people do not know them anymore today.

However, that doesn’t mean this company that has been here for more than a hundred years now is not worth their salt.

Starting in 1904 as the Schrade Cutlery Company, Schrade knives gained widespread appeal and appreciation among other knife lovers due to the kind of quality and attention to detail they brought to their knives. They became a fast-growing company, selling several knives to the public within that timeframe.

Since the company was first launched in New York, they were the true American brand which might have contributed to the company’s high-quality standards at the time.

Since the Imperial Knife company focused more on the middle and entry class markets with its pricing, it was able to provide sufficient competition to Schrade.

Following the purchase and merger, Mr. Baer went on to purchase the Schrade Cutlery company after just five years in 1946, owning three of the largest knife-making companies within the US. After the purchase, the name of the conglomerate was changed to Schrade-Walden Cutlery Co, Inc., paying homage to the hometown of these knives.

Within that time and 2016, Mr. Baer renamed the company when he took it private to prevent a hostile takeover. Rights to the Schrade company have since been purchased by Taylor Brands LLC.

As if those changes of hands are not enough, Smith & Wesson also took a big bite of the pie when they purchased Taylor Brands LLC in 2016, now laying claims to the Schrade company as one of its assets too.

The Challenges with Dating a Schrade Knife

There will always be challenges with dating any knife – such as we had when dating the kissing crane knife or the ka-bar knives.

With the Schrade knives, the situation is unique. Here are a few reasons why:

There are a few more concerns, but you probably have them yourself or don’t care to face them either. That is why you are here.

Having considered all these, let’s get to dating your Schrade knives properly.

Dating A Schrade Knife from Any Era

Don’t let the challenges from dating a Schrade knife deter you from knowing what era that blade of yours came from.

Picking the popular and well-circulated knives from the brand, here is a guide to get you through.

Everything from the model number to the description of Old Timer knives and when they made the market can be found here.

Alongside the Old Timer knives, Schrade was also known for the Uncle Henry models.

One of the tell-tale signs of the Uncle Henry knives (if you can’t tell them apart in another way) is that they come with the plus marking on their stamps. Although some of them are known to not have this plus sign, the majority of them do.

Follow the chart below to find the era during which your Uncle Henry knife from Schrade was made.

What if you own a Schrade knife that is neither an Uncle Henry nor an Old Timer? You are in some luck as I found a guide to dating the knife for you also.

I have attached an image of the dating chart here for you:

The methods above alone might be enough. In the case you don’t have any or all of the model/ serial numbers, though, it becomes more challenging to date the knife.

In those cases, here are some pointers to dating your Schrade knife effectively:

Without the specific model number of the knife, the tang stamp still offers a good deal of information about when it was made. Remember that the knife company did change hands a couple of times which means the logo (as well as the stamps) also had their changes.

For your reference, check the tang stamp chart above to determine what era your Schrade knife belongs to.

Not all of the Schrade knives had name markings on them as they were not all a part of a special series. For those that belonged to series like the Old Timers or Uncle Henry, though, you would see OT and UH respectively.

Even if you didn’t have any other piece of information on the knife, that allows you to narrow things down to the era when those models were created.

Refer to the charts above to see when the first of these named models made the market for an approximate dating of your Schrade knife.

When Taylor Brands LLC bought the assets and rights to Schrade knives, they began to make some of these blades in the old style again. They got almost everything right and you could be tricked into thinking your knife is an old one when it is, in truth, one of the newer versions from 2004.

For this, I recommend checking the production details of that knife via the Smith & Wesson site catalog. Even if your knife is truly an old unit, it never hurts to confirm that you are not one of the newbies to be on the safer side of things here.

This sounds like such a small thing but the number of lines the stamp takes on your Schrade knife could also be used to approximate its date.

Note that this technique does not provide any actual dates on its own, neither does it even point you to an era when used alone. Instead, you can use it to quickly determine which one of two Schrade knives is older than the other.

When out with friends who also have a Schrade knife of their own, this is a fine way to know who has the older model without getting into the technicalities.

Sometimes, when all else fails, you can reach out to some specific forums for help.

Some of the forums I would recommend are AllAboutPocketKnives (AAPK) and BladeForums which are focused on knives.

You can also go to knife sections in other forums that are not all about knives but have a massive audience of knife enthusiasts anyway. You would find such on Reddit and Quora.

Where Are the Schrade Knives Made Today?

The earliest versions of the Schrade knives were made in the USA facility at Walden where the company was first located. On acquisition by Albert M. Baer, the production of these knives stayed within the USA too.

Once Taylor Brands LLC got control of the assets, the production of the Schrades was moved to Taiwan, China, and other parts of Asia. This move would allow the brand to save on production costs without driving up the prices of the knives too much.

However, that proved to be a serious undoing for the brand name as many knife collectors, users and enthusiasts started to notice a decline in the quality that used to be associated with these knives.

Are all Schrade knives made in China?

Schrade knives started with manufacturing in the USA till the company’s assets were acquired by Taylor Brands LLC. Production of the knives has since been moved to Asia with some production facilities in China and Taiwan.

As of today, there are no more Schrade knives made in the USA, but some of the older models made in America still exist in the wild.

Are Schrade folding knives any good?

There is a general acceptance between enthusiasts that the quality of these knives has now dropped since their production was moved out of the US. If you could still find Schrade knives with the ‘made in USA’ stamp, though, you are in for a fine folding knife experience.

What is a Schrade knife worth?

This depends on whether we are talking about the original Schrade knives or the new ones made today.

Depending on the model, year, condition, and seller, vintage Schrade knives could fetch a good sum in the collector’s market.

For the new ones, you can get good Schrade knives for under $50. 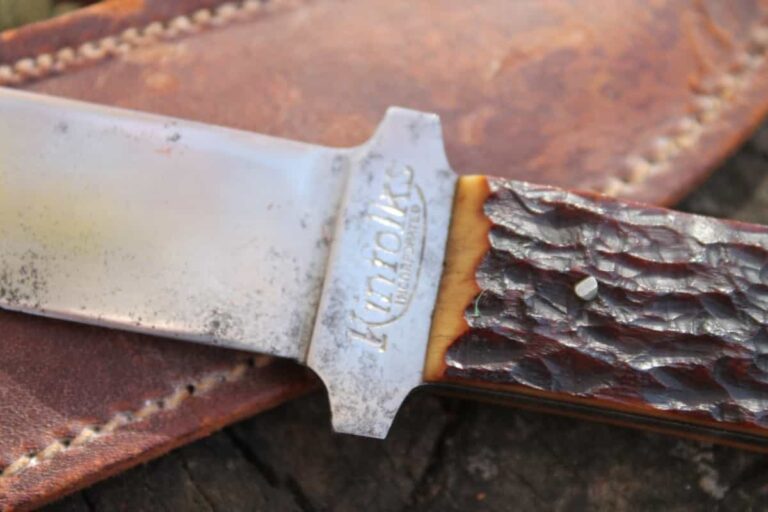 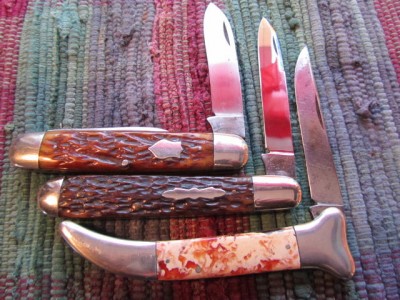 If you have spent some time here before, then we have dated some pretty amazing knives together. Of course, they were sharp and most of them are older than us, but that doesn’t mean we lost interest. Today, it’s time to date the Cattaraugus knife to a specific era and see what beauty you have…