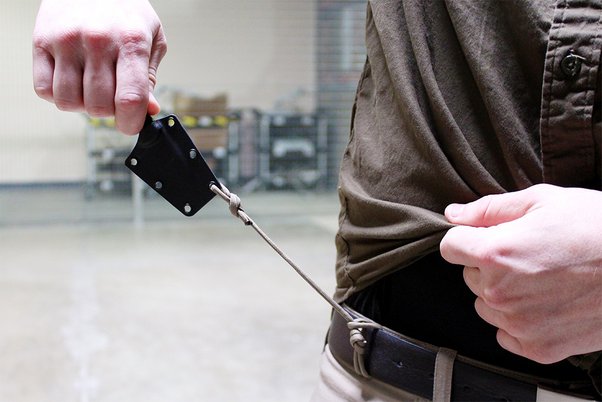 If you live in regions where you have to conceal carry your EDC, you should be concerned about the best way to conceal the knife.

For starters, make sure you don’t need a concealed carry permit for the exact blade that you have – or you’ve got the permit if needed. Once you have that covered, let’s dig into the various ways to carry your knife concealed in public.

How to Conceal Carry Your Knife in Public

Depending on your style and preferences, I have included several conceal carry methods that you would find applicable:

#1 Carry the knife in your pocket

What did I just say?

Yes, I mean that. The knives that you can carry in your pocket are ideally fixed-blade EDCs with less than three inches blades, or a folding/ pocket knife. The same goes for swiss army knives.

For those who want to tow the fixed blade path, get a quality sheath for your knife. This protects the fabric of your pocket but most importantly, your fingers whenever you reach into the pocket to pick anything else.

This mode of concealed carry only works when you have slightly deep pockets (literally).

The pocket carry method is best suited to folding blades. If you want something preferable for fixed blade knives, skip to #3.

#2 Clipped on your belt

Good sheaths will have a belt clip on them. These can be used for both open and concealed carry of your knife.

In concealed carry cases, make sure you are wearing a top that covers the entire length of the knife. The top should also be loose-fitting enough such that the outline of the knife does not show in your clothing.

There are two main ways to carry a knife clipped on your belt:

The inside waistband style works best if you don’t have to tuck your shirt into your pants/ skirt. Otherwise, an obvious bulge would give the knife away and might defeat the purpose of the concealed carry in the first place.

This is best suited to fixed blade knives that have been properly sheathed. In this mode of carrying, make sure the handle doesn’t cross your belt/ waistline. This allows for faster access to the knife when you need it, and prevents it from falling through your pants/ skirt too.

I don’t see this around much today but it is a fine concealed carry method too. It is not entirely a novel idea but I like how it builds on the horizontal carry method from above.

Instead of being a straight horizontal sheath, the cant is slightly angled such that your knife is easily deployed from the sheath. I would suppose that this method also allows you to pack other gear on your body.

#5 Carry the knife around your calf

Some sheaths allow you to strap the knife around your arms and calf. Here, we want to go with the calf option.

It is almost like the calf carry that we see for guns. This time, though, it is for your knife.

You should be wearing something long enough to cover your calf if you’re picking this method. The entire aim of making the knife a concealed carry would be defeated otherwise.

Always remember that whenever you sit down, your pants may ride up a bit to expose what you’re carrying. You can reduce the chances of that by wearing your socks over it. As long as you are not breaking any laws by going into where you are with a knife, though, you should be fine

#6 Wear the knife around your neck

I love neck knives for the fact that they can both function as a concealed or open carry method.

In open carry, find a good sheath for the knife, put a lanyard around the sheath/ knife pommel, and wear it around your neck. The same goes for concealed carry but you have to wear the knife inside your cloth now.

Again, this is not the time to choose fitting clothes as that would give away the knife’s outline. With loose-fitting clothes, you can pass that rope around your neck off as a DIY necklace or something of the sort.

Now that you know what options there are, quite a few might be fascinating to you.

Make sure to have considered the following before settling on anyone:

Concealed carry is legal in your area

I cannot stress this enough. Check, check and double-check that you can carry a knife concealed without getting on the wrong side of the law.

Even at that, look for the knives that you can carry concealed so that you don’t err by choosing the wrong ones.

Once you have that checked, you can continue with the rest of the guide.

When using the horizontal or Cant carry method referenced above, the knife is in the center of the body. For easy access, make sure the handle is facing right (for right-handed users) and vice versa.

This ensures you can easily deploy the knife when needed without fumbling it.

Do away with fitting clothes

The idea of concealed carry is to have a weapon on your person without drawing any attention to it. Wearing tight clothing defeats that purpose. Need I say more?

Loose sheaths are a knife mistake waiting to happen, and you don’t want that.

A tight sheath keeps the knife safe but keeps you even safer. You can run, hop and move freely with the knife without ever worrying about it falling off.

Likewise, a good sheath is as important as the knife itself. When it comes to using the blade, you don’t want the sheath to keep your knife stuck – or one that dulls the blade on every return.

I would have loved to recommend a sheath for you but that would be counterproductive. There are so many knife designs out there – from blade style to length – that I would rather have you do your research based on what you have instead.

How Big of a Knife Can You Conceal Carry?

Knife laws usually deal with the length and type of the blade to determine its size.

A knife can only be carried concealed legally if it fits within the prevalent state and local laws for those knives. Even if a knife is within the recommended length, it could still be unsafe to carry depending on the type (such as switchblades and gravity knives).

Take note of these within your state and local laws to get started.

Pocket clips are usually visible which means that they can be considered as open carry. It might be subject to interpretation, based on which cops you meet, but there is a high chance that you run into a cop that enforces this.

Since you are not actively trying to conceal the knife, in its entirety, it can be argued that people around you know that you are armed. It is, thus, best to stick with other methods on this list to conceal carry your knife.

How Do You Conceal A Knife at School?

For starters, you might not be old enough to have a knife in the first place. Even if you were, schools are one of those areas designated weapons-safe, so you should not be carrying knives in there.

If caught with the knife, you could be charged with a juvenile crime or tried as an adult, depending on the circumstances and conditions. Should you live in unsafe neighborhoods where you feel you need to have a self-defense option, speak with a counselor to determine the best line of action.