Barlow knives are considered by some knife collectors to be up there with the 1918 trench knife. However, Barlows have been around for much longer than that and should be considered a bigger collector’s item.

Before you can regard them as a collector’s item, though, you need to know that you are working with the real deal. So, here’s how to tell how old your Barlow knife is – or if it is a real Barlow knife at all in the first place.

Why the Barlow Knives Are Important

For starters, I believe any knife that has seen some centuries should have a place in current discussions. Given the crude manufacturing techniques in playback then, it takes some high-level craftsmanship to create products that will stand the test of time.

Likewise, the Barlow knives have also been the stuff of great men for ages. Among these men is George Washington, the first president of the United States, who used to carry a Barlow of his own around.

I don’t think he would have kept the knife if it wasn’t such a fine one.

For everyone who also loves EDC knives and can’t do without their pocket knives today, the Barlow knives are one of those blades ushering in this movement. Of course, another manufacturer would have done the good work if they didn’t, but they deserve all the accolades they can get for helping to promote the movement.

Finally, Barlow knives are known as American knives but they are not so. While they started selling more units and getting into more hands once they moved to the States, these knives were originally an English brand.

Now, you didn’t come here for a history lesson so I’m going to lay off that. How about we get to telling how old a Barlow knife is?

Challenges in Identifying the Barlow Knives

I do this for other knives, and I would not let the Barlow be an exception.

For myself and most other people looking to date their Barlow knives right, here are the main factors that could pose a challenge to getting the real details:

To clear all doubts, I am discussing how to date Barlow knives made by the original Barlow company here. I have to clarify this since some other manufacturers make some Barlow-style of pocket knives and might even use the naming.

Now that we are on the same page, let’s get to business:

You could have almost guessed that this is where we were going to start from. As with most vintage knives, the tang stamps provide a fine place to start when looking for details on when they could have been made.

Interestingly, the Barlow knives from different eras had something to tell us depending on their tang stamps:

Once you have confirmed the tang stamp, that might be enough to tell you when the knife was made or simply if it is an original or not (in the case of the Russells). Thus, you might need to combine this step with the others below.

Something as small as the center pin of the Barlow knife can help tell if it is an old model, a commemorative one, or downright a replica.

Look for the center pin on the knife handle/ scales and see where it is placed. Here are some insights to help you tell what kind of Barlow you have in hand:

The main logo of the John Russell company has an arrow going through the letter R. Unknown to many, simply observing the arrow can also help you tell the original apart from the fake and establish that it came in the early years of the Russell Barlow knives too.

Some things you want to look out for in this area includes:

Likewise, I have seen some misconceptions about the bolster having to be made of iron instead of nickel silver. Some bigger Barlow knives (such as for hunting and fishing) did come with nickel silver bolsters, so we never can tell if that material made it onto the small options too.

It is better to stick with what we know, though, which is that the smaller ones were made with iron bolsters.

Finally, make sure the arrowhead is not a full triangle but simply a two-line design.  The latter is what you get on the real deal while the former is, at best, a thoughtless reconstruction.

When in doubt, look for forums where there are genuine knife lovers, collectors, and enthusiasts to ask if your knife is a genuine one – and from what era.

Be prepared to provide clear images of the knife from different angles, usually showing the scales, blades, and tang stamp, among other things.

You should also maintain an open mind while not taking the opinion of a single person as the gospel. If you can do all that, you’ll find good help at such knife forums.

How old is a Barlow knife?

That depends on what era you pick the knife from.

The original models said to originate from Sheffield in England first came onto the screen in the late 1600s or early 1700s. These knives became a subject of mass production and distribution in the USA from the late 1800s, and we have newer models made by other quality German and USA brands from the early 1900s too.

So, as you can see, a Barlow knife can be dated differently based on what era it came from, but the real deal should be over a century old anyway.

Who made the original Barlow knife?

Unfortunately, this is one question that has eluded knife collectors, researchers, and enthusiasts for a long time now.

The original Barlow knife is believed to be of English origin but there is no concrete data on who brought about them. That is more of the reason why the John Russell name is associated with these knives today.

Going by what I know of old manufacturers and how they love to put their name on things, there is probably an old Barlow individual somewhere that started making these knives as a local production thing before gaining international acclaim.

Barlow knives have survived many centuries and have been passed down between generations, so they are of good enough quality. These knives may not be the sharpest around but they have proven their durability and longevity of service, so they are better than most knives around today. 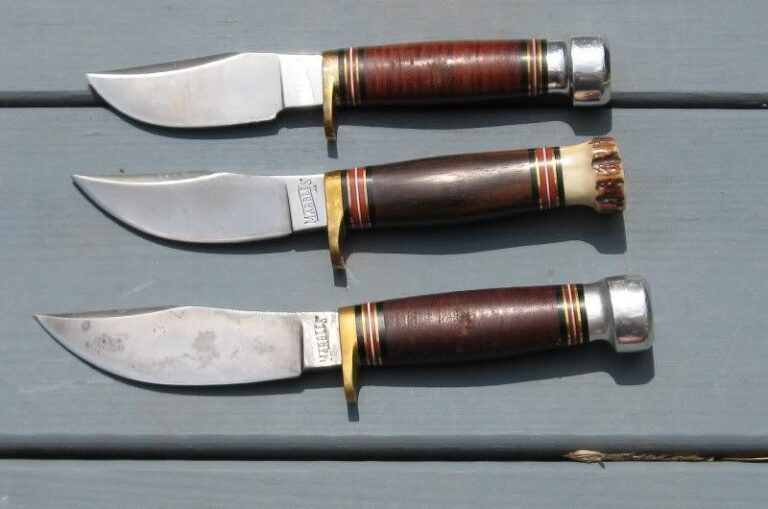 Klein knives are clear vintages, and they’re one of those knives that went to the war. They’re not like the other vintage war knives I’ve dated because they’re not fighting knives. In most of the places that I’ve come across a Klein knife, it was either a military electrician’s knife or for another handyman. Still,…